I had a very busy month! So many exciting things happened! Between the holidays, volunteering, releasing my second music video, and my first album, I sure do have a lot to tell you about!

I started out this month at Walter Reed National Military Medical Center (WRNMMC) with my Red Cross Pack. I met so many people, and the building was decorated beautifully for the holidays! Big indoor trees and lights! It was so sparkly! We went from room to room visiting. One little girl liked me sooo much that when her mom said it was time for me to go and help other little kids, she firmly said “No!” I take that as a compliment, but I felt bad that she was going to miss me so much.

The next weekend, guess whom I saw? I got to visit with Santa Paws! He really wanted me to sit in his lap, but Christen told him I was kind of big for that. He insisted, so I tried to sit on his lap. And I am not used to sitting on human laps, as that is against the rules, and I do not break the rules. So in the photo with Santa, I made a very uncomfortable face… as the humans would say, “the derp-face!” We tried it again with me sitting on a bench next to Santa. Christen and I felt a lot better about that. He smelled like one big ol’ delicious dog biscuit and his face fur was so fuzzy! He is very different than most humans I meet, and that’s why I liked him so much! I told him that for Christmas I would love for everyone to smile… and a few squeaky toys and dog treats wouldn’t hurt, either!

My next visit was at the Armed Forces Retirement Home (AFRH). I love visiting my friends there! I even saw another gorgeous tree! One of my good Veteran friends I visit there said “Hello, Calvin Coolidge!” He greets me every time saying that, so I always know it is him. (Also, I am NOT named after Calvin Coolidge.)

I am so happy to share with you some big news! Brendan & I released our second music video along with our first full-length rock album! You can watch the video for the new song “When You Come Home” here. Our album titled “Songs My Dog Wrote” can be found on iTunes, or you can order a hard copy CD on our new website! I really hope you get a chance to hear it, as my human Brendan and I have been working for a very long time on the songs. My human Christen helped us with the photos and shooting the video, of course! We made this album for all the dog lovers out there because you humans mean so much to us dogs. I really hope you can curl up with your furry friend and give it a listen!

My monthly Hero Dogs therapy dogs class was so much fun! My friend Archie was there, and that was a BIG surprise as he had moved away with his human and was back for the holidays. We worked on “Hug” where someone sits on the ground and I rest my head on their shoulder. I really REALLY like that trick, even without food. I especially like it when the person I hug scratches my hindquarters/sides really well, too! Then we also practiced the spoon trick where we hold a spoon in our mouth, and then humans place items in the spoon and I have to “wait” until I am released, and then I get a reward! We practiced a bunch of other things as well, but those are top secret! Well, actually, I cannot remember because of holiday brain.

We had several other Walter Reed visits in this busy holiday month! At one of my visits I met a young man who got down on the ground with me. I could see that he could really use a hug and without being told I gave him a really good hug on each shoulder! I spent a good amount of time with him and even when I was with other kids he kept coming over! Boy I sure am making a lot of friends!

Then the big day arrived! STAR WARS DAY! My humans had been looking forward to this day for a very long time. I’m not complaining, because to celebrate they got me my own Captain Phasma toy! (…What IS a ‘Captain Phasma’?) I wore a Star Wars star fighter pilot hoodie as well! After I was all tired out, I went for a nap, and when they came back Brendan looked like he had eaten the biggest… bestest… treat… EVER! No, seriously, he had the biggest smile on his face I think I’ve ever seen!

I made my last WRNMMC Red Cross visit of the year in the days before Christmas. It was quite empty as most people went home for the holidays, but I did get to spend time with some great kids and their families who were in for a treatment. I even got to cuddle with one little girl. I am really getting used to this therapy dog gig!

The big night arrived! Christmas Eve! We went on a long walk because it was very warm, then my humans went out to a lovely dinner and when they came back we had family and friends over. At some point, as in most social gatherings I attend everyone wanted to see my “Tricks.” …Humans are easily amused.

Christmas morning came! I ran down the stairs to see a new dog bed with my name on it! I was so happy I laid down on it right away! I continued to sit and wait as the humans handed me some new toys! I especially like my fire hose toy with a raccoon tail and my red ring toy! Later that night we went over to my Grandparents’ house and I played with my little friend Amigo! My grandparents had a beautiful painting of me painted by a close friend of the family, and I know my humans will treasure it forever! I also got a snake that squeaks! Boy oh boy it was such a fun-filled day! Santa Paws really did come and he knew exactly what to get me. I even got homemade peanut butter treats that Christen made, and they made me drool so much! My humans said they don’t mind spoiling me because I work so hard throughout the year and that deserves some awesome gifts! I was truly a good boy this year!

The next day I visited with extended family members and I got another toy that my Great Uncle said I have to use in the water, so I guess come warm weather I will be swimming! There were so many smells on the floor of other dogs! I did really well helping pick up the wrapping paper and putting it in the trash bag. I showed everyone the things I have learned this year and they thought I was so smart! 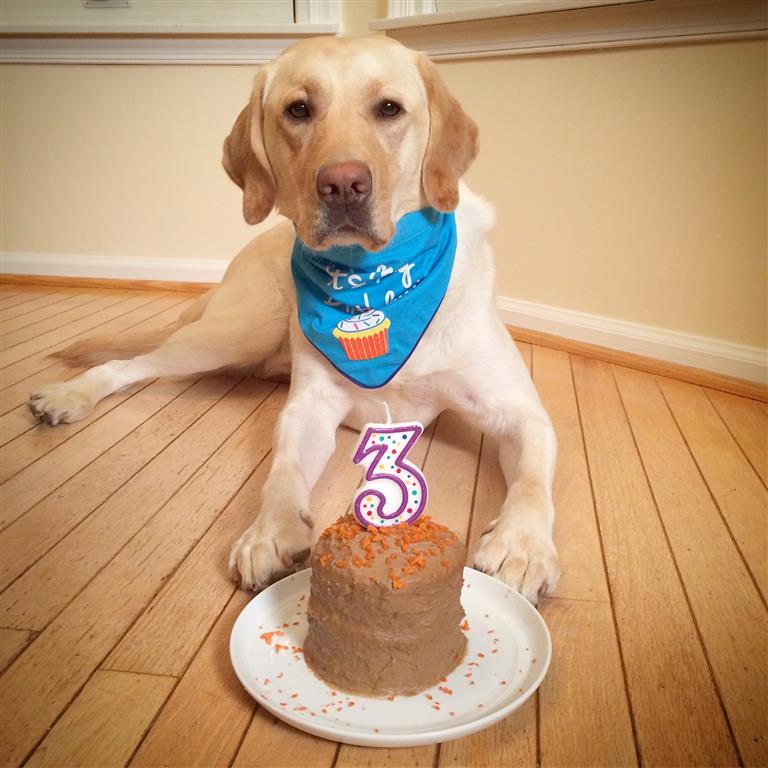 A week later we celebrated my 3rd birthday on New Years Eve! Christen baked me a cake from scratch! A little advice to the humans out there… make something homemade for your dog, because they will LOVE it! She made me a peanut butter carrot cake with banana peanut butter frosting and carrot sprinkles! I drooled so much while waiting to eat the cake! I was not allowed to eat the whole cake all at once, but that’s okay because that means I have leftovers!

Looking back at three years on this earth, I can say I have accomplished a lot! I was a service dog in training and then I became a therapy dog. Just in this past year I have become a Red Cross therapy dog at Walter Reed, I have become a Canine Good Citizen, and I even released a full-length rock album! Those aren’t all of my accomplishments this year, of course, as the most important things I have accomplished are moments I have shared with those I have visited and the smiles I have spread. As you look ahead to this New Year, I hope to encourage you to do the same. You don’t have to be a therapy dog to spread smiles to those that need it (although it does help a lot). Just look around and you will see ways in which you can help others, in both big and small ways. Let’s make the world a better place!